You'll be back for more 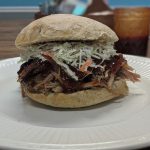 Dry Rub (save a tablespoon or two for homemade BBQ SAUCE!)